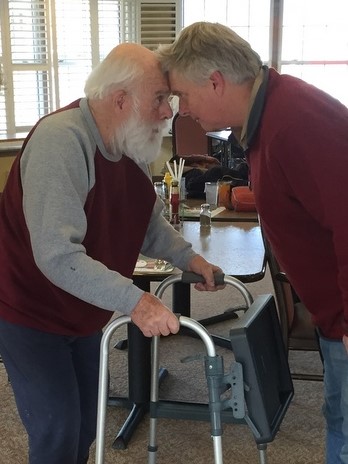 Respect Enough to Go Where You Go

“Peter said to Jesus, ‘Lord, I am ready to go with you…” (Luke 22:33)—and then “…the cock crowed” (Luke 22:60).  I love the disciple Peter.  He tries so hard.  His heart is always so willing.  Even though he is not able to carry out his hopes—at least he has hopes!  What I’d like to highlight here, though, is that Peter’s hopes are born out of a deep respect that he has of Jesus.

When we talk about person-centered care, the approach should also born out of this same place of deep respect.  Because we love and respect our loved one so much, we are then willing to let our loved one take the lead in terms of what great care might look for them.  This sounds good in theory but maybe some examples here might help us fare better than Peter.

Because some of my thoughts these days are around my own parents who have Alzheimer’s, maybe that would be as good a place to start as any. Where would a conversation with my father start?—a test to see if he remembers my name?  When my father does something inappropriate, mostly out of years and years of habit, should the course for correction be based on my anger that I told him not to do it so many times already?  When my father keeps asking the same question over and over again every two minutes, where should my source of patience come from?  “Person-centered care” with Christ as our model might look something like this…

Maybe when it comes to starting a conversation with my father, we might remember that Jesus always respected those he loved so much that he was always willing to start with the gifts that they had.  In the feeding of the 5000, Jesus began with what was offered—five loaves of bread and two fish (Luke 9:16).  When Jesus made breakfast for the fishermen, following an emotional morning of fishing, he asked them to bring the fish that they just caught (John 21:10).  Instead of starting a conversation with my father with a test of what my name is, maybe the opportunity might always begin with looking for what my father has or is willing to give me.  Taking what he gives me, I can then look up to heaven, bless it, and then begin the incredible miracle of sharing (Luke 9:16).

When my father collects, whatever he collects sometimes in the thousands, maybe a person-centered source of correction might begin with loving looking at my father without being shamed by his actions.  Because Jesus was not shamed by Peter’s desertion, he sought Peter out following his resurrection—in other words, forgiving him.  As Peter returned to his old job of fishing and showed signs of withdrawing from community, maybe the real question might be if Peter can forgive himself.  My father began collecting things because he grew up very poor and his collecting was a way for him to save on expenses.  Is there a way to use my father’s “expertise” to help my family/his community save money?—that might be a life-giving question.

When my father asks the same question over and over again, we can remember that Jesus is always willing to adjust to us.  The first two times Jesus asks Peter if he loves him, Jesus chooses to use the word agape (unconditional love)—even though Peter answers that he loves him with the word phileo (brotherly love).  We’d hope that Peter, in the third time Jesus asks, might switch to agape to match Jesus—but instead, it is Jesus who shows a willingness to change to where Peter is by asking now if Peter phileo-loves him (John 21:15-17)!  Maybe Jesus’ respect and willingness to change might be the birthplace of our tolerance.

Peter began by declaring that he is ready and willing follow Jesus.  However, we find that it is the servant-hearted Jesus who is willing to go where Peter goes, even though his failures, out of his deep-seated respect for his beloved disciple.  May that deep-seated respect encourage us all to find life—real life!